OPMUX is particularly well suited for ultrasonic measurements as well as other kinds of measurements that need many channels. Together with the measurement card OPCARD and ultrasonic probes it could be used as complete ultrasonic testing device.
Each channel has separate pulser & receiver.
MUX can operate with transducers of the resonant frequency of 0.5MHz - 25MHz and any impedance.

Depending on the version MUX has from 4 to 35 channels. Each channel can operate
as a transmitter and as a receiver. Only one transmitter can operate at the same time.
Transmission and reception can take place on different channels - for example,
we transmit by the transducer connected to the first channel and we receive
the signal from the second channel transducer.

MUX is equipped with a memory, which contains preset sequence of active channels (i.e. the sequence of addresses of transmitters and receivers for subsequent triggers).

MUX has got one output signal. Transmitter with which you want to record the signal is selected by the internal multiplexer. Then the signal is fed to an amplifier with filter.

The device is configured via the serial interface (RS232 standard).

The device is powered by a 12V DC. The device is equipped with a fuse, short circuit - and thermal protection in circuits of transmitters. 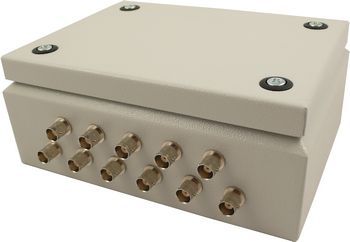 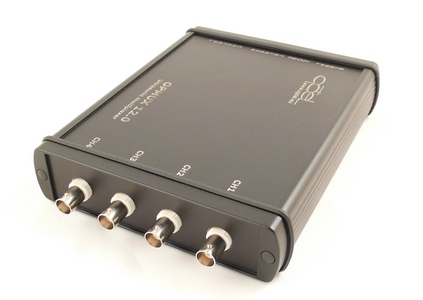 *on request; not available in MUX4

*maximum voltage depends on the load

*parameter can be changed on request

Manual for OPMUX
with firmware version 1.01